WITHOUT CONDITION BY A.J. BACZEK - REVIEW 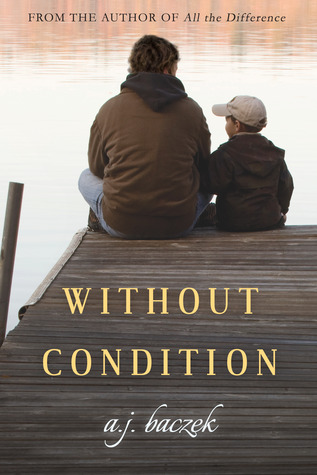 When Jason Ashford walked out on his wife, Jennifer, six years ago, he moved across the country and tried to put the past behind him. When Jennifer asks him to return to New York to finalize their divorce, she reveals to Jason that she was pregnant when he left her, and that they have a five-year-old son named Corey. In case that isn’t shocking enough, Jennifer declares that she wants him to take sole custody while she embarks on new adventures of her own.Jason is left feeling overwhelmed, confused, and angry as he returns to Arizona with Corey and discovers that his new life is going to be even more difficult than he anticipated. With the love and support of his neighbor, Kate Thatcher, Jason faces the challenges of being a single father, and discovers why this unexpected life change might turn out to be the best thing that ever happened to him.

I don't even know how to start.  I think I say that a lot, but honestly I have so many feeling about this book that I don't quite know where to start.

This book is heart wrenching, and fabulous all at the same time.  Jason is such a down to earth guy just living life day to day, when his whole world changes in the blink of an eye it seems.

Jason flies to New York to finalize divorce papers with his soon to be ex-wife Jennifer.  Jennifer drops a bombshell on him.  He has a kid.  How does a person keep that from someone?  It's horrible.  Not only does she drop that bombshell, but she tells Jason she wants him to take full custody of Corey so she can go live her life carefree with her new beau in England.  Hate her yet?  I DO!!!!

I cannot imagine finding out I had a child (that would be very hard in my case since I am the girl..hehehe) and that my ex kept that child away from me for 5 years.  Who does that????  Oh Jennifer does.  She is a piece of work.

If you don't love Jason at the beginning of this book, you will love him so much by the end.  He is such a great guy.  When faced with raising his son, he does so, and does it the best he can.  Was it challenging?  Of course.  They had to get to know each other and had to learn how to live with a new person.  I cannot imagine how hard that would be.  All of the sudden you are faced with the responsibility of a child, his well being, his happiness, his health.  That is an overwhelming thing for any parent, but especially a parent of a now 5 yr old child.

Corey is such a sweet little boy.  Faced with the fact that his mother abandon him he takes everything so well.  I think that is because Jason does such a great job of shielding him from the "reality" that has becomes his life.  My heart broke every time Corey realized that his mother didn't call him for his birthday, or didn't want to call or visit him.  He was 5.  He knew the difference.  It was absolutely heart breaking.  I think I cried on several occasions.

Jason has the help of his wonderful neighbor Kate, who I LOVE!  She helps Jason out whenever she can and helps Corey's transition into his new life and school.  She is such a sweet woman.  I loved her from the moment she entered the picture.  She is kind, loving, and honest.

Jason has other things in his life that he had never really dealt with either.  He has forgotten God, and all that he has done for him.  This book does have a religious take to it, but it's not overwhelming.  Jason's next door neighbor Kate on the other hand is very religious, and sometimes tries to get Jason to face his problems, and find God.

Jason's parents are amazing.  I loved them.  They supported their son no matter what, which is what unconditional love is.  Every interaction with his parents was beautiful.  I think I cried like a little girl when Jason finally realized that things would be better in his life when he faced what had happened and put them behind him, and found forgiveness.  There is a moment between Jason and his parents that had me in tears the whole time.  I know, it's silly.  It's just a book.  I just couldn't help but feel so touched.  Plus, I was extremely attached to Jason, and his little boy.

Source:  I was a beta reader for this book, but also bought this book for myself on Amazon.  I am not affliated with Amazon in any way, and was not compensated for this review.  These are my own PERSONAL thoughts on the book.

A.J. Baczek has been in love with words for as long as she can remember. In addition to writing and reading fiction, she enjoys hiking, five-hour conversations with friends, and Italian food. She dances to her eclectic music collection when no one’s watching, and can play a gloriously mediocre game of tennis. She positively adores the rain, and thrives on adventure. She lives in the Pacific Northwest with her two crazy cats.