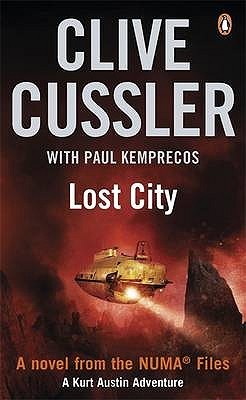 Lost City The discovery of a body frozen for ninety years in a glacier high in the French Alps seems of unlikely concern to Kurt Austin and the NUMA Special Projects team. But when those on site are trapped in alpine tunnels flooding with glacial meltwater, Austin can hardly ignore a cry for help. And this near tragedy proves to be no mere accident.

I had this audio book in my car to listen to while I drove around running errands.  Like in CD form...so old school ;).  I love to have a book to listen to.  This was one I could leave in my car and now have to remember to take my ipod every time I left the house.

I didn't realize it was a series, and just happened to see it at my mothers house, and took it to listen to.  If I missed anything from it being  #5 in a series, then I didn't know it.  It worked well as a stand alone in my opinion.  Although I can see where the next book will be taking me.

This was an enjoyable listen.  It was a pretty exciting book.  Kurt Austin is like 007.  He is good at everything, and can escape any situation ;).

This story is about greed, money, and a buried body.  Yup buried body.  In ice!  I thought the book would all be about Atlantis because of the name.  Atlantis is mentioned but that isn't what this part of the story was about in particular.

When out on a mission for NUMA in the French Alps, during one of his dives he finds something that looks like a airplane in the ice.  Meanwhile at the power plant where another team was doing some research they found a body in the ice.  They freed the helmet that the man in the ice must have been wearing and a box holding some papers.

When the discovery was found a team of reporters was called in to witness this wonderful discovery.  During the filming of what the team had found a man walks in with a gun and takes the box away from them and floods the tunnels.

Now it is a fight for survival.  You would think that is where the action stops but no.  There is more going on, on the surface that goes along with the discovery this team had made.

One of the women on the research team was able to conceal the helmet they found and took it to antique dealer to see if he could help her find out the age of the helmet, and exactly what it was made of.

This is where Kurt and his gal encounter problem, after life threatening problem.

The story moves well, and the narrator was awesome.  There were many twists and turns, but I felt like it ended well.  I can see where the next Kurt Austen adventure will take us.  It was exciting to listen to, and sometimes when I got home I would just sit in my car for just one more chapter ;).    I had never heard of this series before until I saw it lying on my moms counter.  I think I will have to look into getting the rest on audio book....or maybe even CD...I know going old school again ;).

I am glad I picked it up because I enjoyed it from the beginning to the end.  I hope the narrator is the same for the other books, because I really liked him.

Source:  I borrowed this from my mother.  I was not compensated in any way for this review.  These are my own PERSONAL thoughts on the book. 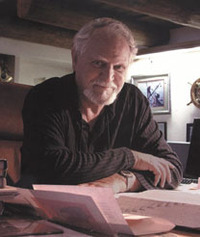 Cussler began writing novels in 1965 and published his first work featuring his continuous series hero, Dirk Pitt, in 1973. His first non-fiction, The Sea Hunters, was released in 1996. The Board of Governors of the Maritime College, State University of New York, considered The Sea Hunters in lieu of a Ph.D. thesis and awarded Cussler a Doctor of Letters degree in May, 1997. It was the first time since the College was founded in 1874 that such a degree was bestowed. Cussler is an internationally recognized authority on shipwrecks and the founder of the National Underwater and Marine Agency, (NUMA) a 501C3 non-profit organization (named after the fictional Federal agency in his novels) that dedicates itself to preserving American maritime and naval history. He and his crew of marine experts and NUMA volunteers have discovered more than 60 historically significant underwater wreck sites including the first submarine to sink a ship in battle, the Confederacy's Hunley, and its victim, the Union's Housatonic; the U-20, the U-boat that sank the Lusitania; the Cumberland, which was sunk by the famous ironclad, Merrimack; the renowned Confederate raider Florida; the Navy airship, Akron, the Republic of Texas Navy warship, Zavala, found under a parking lot in Galveston, and the Carpathia, which sank almost six years to-the-day after plucking Titanic's survivors from the sea. In September, 1998, NUMA - which turns over all artifacts to state and Federal authorities, or donates them to museums and universities - launched its own web site for those wishing more information about maritime history or wishing to make donations to the organization. (www.numa.net). In addition to being the Chairman of NUMA, Cussler is also a fellow in both the Explorers Club of New York and the Royal Geographic Society in London. He has been honored with the Lowell Thomas Award for outstanding underwater exploration. Cussler's books have been published in more than 40 languages in more than 100 countries. His past international bestsellers include Pacific Vortex, Mediterranean Caper, Iceberg, Raise the Titanic, Vixen 03, Night Probe, Deep Six, Cyclops, Treasure, Dragon, Sahara, Inca Gold, Shock Wave, Flood Tide, Atlantis Found, Valhalla Rising, Trojan Odyssey and Black Wind (this last with his son, Dirk Cussler); the nonfiction books The Sea Hunters, The Sea Hunters II and Clive Cussler and Dirk Pitt r Revealed; the NUMA® Files novels Serpent, Blue Gold, Fire Ice, White Death and Lost City (written with Paul Kemprecos); and the Oregon Files novels Sacred Stone and Golden Buddha (written with Craig Dirgo) and Dark Watch (written with Jack Du Brul). Clive Cussler lives in Arizona.