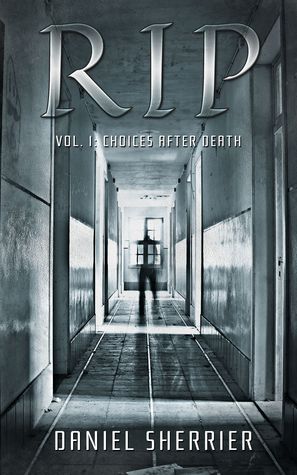 Ghosts are people, too, but not all choose to be good people.Rip Cooper must overcome his fears and kill dead people to prevent them from corrupting the living. This young loner learns he can perceive ghosts with his five senses as if they were flesh and blood, and he's just as solid to them -- pretty much the only solid thing, in fact. He works alongside an impure “angel” and his ex-best friend's ex-girlfriend as they teach him how love can lead to strength.RIP vol. 1: Choices After Death features the first four novelettes in this coming-of-age and redemption story: “Touch,” “Alone,” “The Crazy Line,” and “Point B,” plus the short story “Strength.”

I started reading this book last night.  I was sitting in my house around midnight, it was dark and the first few pages scared the jeepers out of me.  So, I was SUPER excited.  Growing up there was a window at the top of our stairs, and I always was afraid I would see someone standing outside the window.  Well....Rip experiences this kind of thing in the very beginning.  His is even more creepy to me though.  A dark basement, and then BAM something is in front of him.  I had to turn my lights on while I read :).

I wish the book would have kept up the "scary" for me.  I LOVE scary.  It turned out to be quite a hilarious read actually.  Rip's one of the "Seven" on earth who are here to send "ghosts" back to heaven or Hell.  Serissa is ghost assigned to Rip to help him fight the ghosts.  She is a crack up.  Kalli is his friend that is a girl, that seems to be there for him at all times.  I do think it was a little unrealistic when Rip told Kalli about what he does for her to just "accept" it right away.  It worked, but it seemed a bit fast.  Then Rip asks her out right after a fight with a ghost.  It seemed a little out of place.  I do wish that there was more "love" story between Rip and Kalli, but the story worked.

I still don't quite understand how the ghosts were able to hurt Rip, but I did like how the "feelings" came into it.  Some of the ghosts could bring on "good" feelings like Serissa and some of them brought on feelings of "fear".  It was interesting.  People couldn't see them, but they could see the after math of what the ghosts were making the people see.  Made them look a little crazy.  It was interesting.  I liked how Kalli couldn't "see" the ghosts but she was willing to help and could "feel" Serissa.  She could tell if it was a good or a bad ghost by the feelings she was having.  I like how she seemed to be connected without actually being connected.  I would have found it quite entertaining to see some guy talking to himself all the time.  It seems that Rip was doing that quite often because no one else can see the ghosts.  The pulling out of his phone and talking was quite clever :).

I found this book to be quite entertaining.  Not at all what I expected it to be.  Especially after reading the first few pages.  I thought I was in for a "scary" ride.  I would have loved that, but this turned out pretty good.  It's such a different take on ghosts than I have read before.

Source:  I was given this book by the Author in return for an honest review.  I was not compensated in any way for this review, and these are my own PERSONAL thoughts on the book.

Daniel Sherrier is a writer based in central Virginia. This is the guy who writes the Earths in Space and RIP series, which you've doubtless heard much about. Occasionally, a play he's written gets performed somewhere. He graduated from the College of William & Mary in 2005, where he earned a degree in the ever-lucrative fields of English and Theatre. Recently, he achieved his black belt in Thai kickboxing. And there was that one time he jumped out of an airplane, which was memorable.