My Name Used to Be Muhammad: A True Story of a Muslim Who Became a Christian - Review 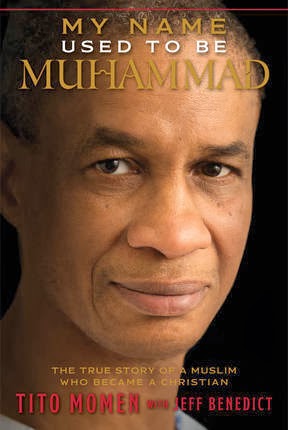 Tito Momen was raised Muhammad Momen. He was born in Nigeria and was taught to observe the strict teachings of Islam. Atage five he woke at 4:45 every morning to attend the mosque andperform dawn prayer with the other men in his village. His training tomemorize the Qur'an began at age five. It was at this same age thathe began copying the entire Qur'an word for word. He was beingraised to emerge as a leader among clerics, capable of leading a jihad,or holy struggle, to convert nonbelievers to Islam. However, Tito'spath took an expected turn when he was introduced to Christianity.His decision to believe in Jesus Christ cost him his family and hisfreedom. Tito thought he would spend his remaining days enduringa life sentence in an uncivilized Egyptian prison. For fifteen years hesuffered and waited and prayed. Tito said, "I never gave up hope.I never stopped believing." Although he was falsely imprisoned,beaten, and ridiculed, Tito's remarkable true story is one of faith,forgiveness

This was a really great book. I really do not like reading non-fiction, because I usually read to "escape" reality not read about it.  I had heard so many wonderful things about this book, so when I saw it on my moms table I grabbed it and soaked it up.   It was so hard to read,  but I couldn't put it down either.  It is mind blowing to me that religious persecution is still out there.  I cannot fathom being imprisoned for being a Christian.  Yet, this is exactly where Tito (aka Mohammad) found himself.

His life story is absolutely amazing.  It was so emotional to read this first hand account about the persecution this man went through just because he decided to become a Christian.

He was brought up Muslim, and he was brought up in fear.  With every page I turned I couldn't help but feel so emotional.  His childhood was so horrific.  Maybe not all the time, but enough of the time.  The poor boy lived in fear.  He worshiped out of fear, and did everything out of fear.  How sad is that?  He grew up with a father who repeatedly beat him, and his mother, and was expected to just accept this behavior as "okay".  It was an eye opening reading experience.  A child should never have to live in fear. I do not care what part of the world they live in, what religion they are born into, or choose to follow, or land they live in.  It was so horrific.  I cannot believe the way he grew up.  I am blown away that he turns out to be such an amazing man who breaks the cycle of hate and finds true happiness.

Mohammad (Tito) was brought up to think Christians were evil, that dancing was evil, that anything that wasn't of his religion was evil.  He grew up with so much hatred around him, yet in all of this he realizes there has to be more to life.

This man served 15 years in prison for converting to Christianity.  Not only Christianity he became a "Mormon".  I am a Mormon m self, and this book made me even more thankful for where I was born, how I was brought up, and my love for my religion.  I have had to deal with people who "hate" my religion, but never have I feared for my life because I am a Christian.  I cannot even fathom that it is possible for people to be tortured, imprisoned or hated because of their faith.

Tito, when asked after all he had gone through if it was worth converting to Christianity,  he didn't hesitate when he said "YES".  I hope so much that I would have the faith and the conviction this man had to stand up for what I believe in no matter what circumstance I am faced with. No on on earth should ever have to deal with such horrible things.

While serving his time in prison he could have become bitter, and hateful, but he never did.  He may have gotten depressed and saddened by his situation, but through the whole experience he tries his hardest to make the best of it.  He learned to love the people he was in prison with.  He learned a lot about himself in prison.  I do not think I would have the gusto to stay so positive.  I know that during his incarceration his faith was tried more than any one persons faith should ever have to be, yet he stays strong, and keeps the faith.

I am so glad I took the opportunity to read this amazing book.  I love that I have grown up a Mormon!  I  love that I live in a land where I am free to choose, and free to worship.  To me there is never ever a reason to treat another person differently for any reason.  People should be treated with love and kindness no matter what.  I know that religion is different in different countries, yet in my opinion it shouldn't matter.  In my dream world no one would ever be harmed, punished, or persecuted for any reason.  Especially for the way they choose to worship.  No one should ever have to live in fear for any reason.  There should never be any reason for religious persecution of any kind.  The world really needs to be more accepting of every one, and every religion.

Tito is an inspiration to me.  He suffered almost his whole life.  He was beaten, tortured, and imprisoned.  He was treated unfairly, and yet when it was all said in done, he had love in his heart.  Such an inspiration.  I have been touched and have learned so much while reading this book.

SUCH AN AWESOME BOOK!!!

Source:  I borrowed this book from my mother.  I was not compensated in any way for this review, and these are my own PERSONAL thoughts on the book.

yet it deserves so many more stars!!!!!

Tito Momen
Jeff Benedict is the author of eleven critically acclaimed books, including Little Pink House, The Mormon Way of Doing Business, and Without Reservation. His articles have been published in Sports Illustrated, the New York Times, and the Los Angeles Times, and he appears as an expert on network news and cable television programs. A frequent public speaker, Mr. Benedict teaches writing at Southern Virginia University.