BLOG TOUR AND EXCERPT FOR - SKINSHIFTER - BY ALYCIA CHRISTINE 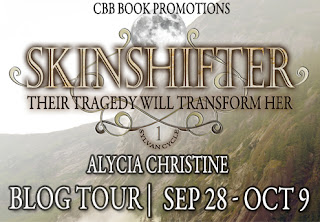 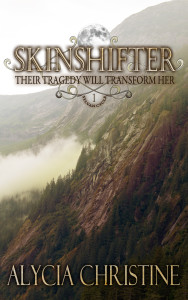 By Alycia Christine
Skinshifters are a curse. The Asheken deadwalkers proved that fact when they used skinshifters to spy against the Sylvan races during the Second War of Ages. Now, after three centuries of peace, the deadwalkers have found a secret way back onto the Sylvan Continent and this time they seek not just to conquer their enemies, but to enslave them body and soul.
When the Feliconas Clan suffers the deadwalkers’ first raid, one werecat—a skinshifter who has concealed her abilities—survives the massacre. Even as Katja struggles with her grief and guilt over her murdered kin, she must unite with other Sylvan refugees to defeat the deadwalkers before they can butcher and defile the other races. But can this skinshifter trust her newfound allies or will their secrets prove even more treacherous than her own?
“As involved as it is vividly eloquent, Alycia Christine’s Skinshifter…is fueled by engagingly twisted fantasy elements, vivid imagery, appealing characters, rousing adventure and terse storytelling.” –Bestsellers World
“Action is well done, tension is wonderfully detailed and maintained throughout, and fantasy readers will find in Katja an appealing, believable character whose quest and concerns drive a story line that is vivid, accessible, and involving.” –D. Donovan, Senior eBook Reviewer, Midwest Book Review


Skinshifter Novel Excerpt #7: The Face in the Mirror

Katja and Lauraisha walked through the dim stone hallway past several old metallic doors, all shut against the air, until they reached the last door, heavier than the others and held slightly ajar. Light streamed through the crack and, after some hesitation, the females peeked into the richly red-carpeted room. The room was again empty except for a lone figure staring into a full-length mirror. The figure was again cowled in black, but as the human and werecat watched, it lifted a gloved hand and pulled back the hood hiding its face.

A gasp escaped Lauraisha’s lips as they both stared at the male’s pale profile. He was almost elfish in his features, yet he possessed a strong chin and an aquiline nose, which added a roguish quality to his handsome face. He untied the cloak and let it fall in a careless heap about his boot-shod feet without taking his brilliant blue eyes away from the age-stained mirror. The act exposed waist-length black tresses cascading freely down bare shoulders and a leather-jerkin-covered chest. The male was powerfully muscled, and even though he was a paw-width shorter than Felan, Katja sensed that he could probably match the werewolf in speed and strength.

The male leaned toward the mirror while holding his quarterstaff like a shield across his chest and stared intently at his reflection. The females followed his gaze and spied the male’s likeness staring back at him. As the females watched, however, his reflection slowly changed into a sallow-skinned image, which retained most but not all of the male’s features. The creature in the mirror had a unique deep, purple scar that ran the length of his left arm and still wore his black cloak draped over his right shoulder. The most shocking difference between the two, however, was their eyes. While the male’s blue eyes betrayed a soul smote with anguish, the reflection’s blue eyes burned with terrible ire. His expression held insatiable hunger and hatred so vile that Katja had to turn away from the sight. She moved her attention to the cloakless male and beheld conflicting tremors of rage and grief wreak havoc across his face.

As the werecat and human watched, the figure in the mirror began to laugh—a cold, cruel sound that exposed the fully developed fangs of a vampire. The fiend’s maniacal laughter filled Katja’s being with revulsion so powerful that it made her want to retch. As the creature’s laughter continued, it intensified and the creature’s face morphed from that of a half-elf into the most horrible creature Katja had ever seen—a full Víchí with glowing red eyes, yellow fangs, corpse-white skin, and black-clawed fingers. The mirror emitted a sullen red glow around his body, making him seem even more terrifying, and Katja swore that she could smell the putrid stench of pure evil smoking off of the mirror’s surface.

The laughter turned into a triumphant shriek of insanity, but was cut off abruptly as the burning end of the cloakless male’s metallic staff smashed through the mirror. Glowing red shards exploded outward from the staff, lodging in the stone walls, high ceiling, and floor of the room. The unhurt male was bowed in exhaustion over the rubble of the mirror. His panting breath rattled dry in his throat and his eyes were shut tight against the world as he whispered, “Brother, how could you?” 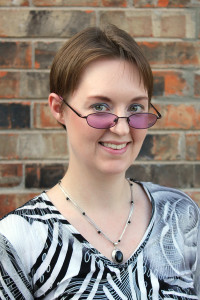 Alycia Christine grew up near the dusty cotton fields of Lubbock, Texas. She fell in love with fantasy and science fiction stories when her father first read Gordon R. Dickson’s THE DRAGON AND THE GEORGE and Robert A. Heinlein’s HAVE SPACESUIT—WILL TRAVEL to her at age ten. Her love-affair with fiction deepened when Alycia took a creative writing course while attending Texas A&M University. After that class, she was hooked as a writer for life. Her subsequent B.S. degree in agricultural journalism not only helped to hone Alycia’s skills with a pen, but also with a camera. Today she uses her skills as a photographer to capture the beauty of the world around her and add additional perspective to her fiction and nonfiction writing. Find her at http://www.alyciachristine.com.


Ends Oct. 14
a Rafflecopter giveaway
Posted by Unknown at 9:54 AM