Welcome to my stop on this awesome tour!  I am excited to share my thoughts with you on this book! 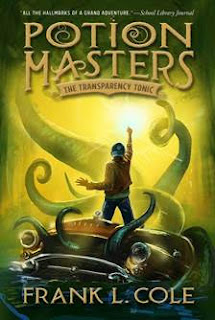 DESCRIPTION:
It has been nine months since Gordy and his friends, Max and Adilene, stopped Esmerelda from destroying B.R.E.W. and the Vessel. Gordy is starting the eighth grade, where he meets another Dram, Sasha Brexil, whose mother is the new President of B.R.E.W. Gordy has also been practicing new brewing techniques, and has even taken some of his potions to school—something expressly forbidden—but when he starts zoning out during practice, he knows something is wrong.

Strange things are also happening at B.R.E.W., because after Wanda confronts the dark Elixirists, she is unexpectedly fired by Mrs. Brexil. And in Greenland, Mezzarix is offered a chance to escape by an old friend, who is working for the mysterious Ms. Bimini. The woman reveals that she needs Mezzarix to replicate an unusual solution known as “Silt.” Mezzarix agrees on one condition: that Ms. Bimini uses the power of Silt to destroy B.R.E.W. forever.

Gordy and his friends continue to work on their potions, but when Adilene learns she will never be able to brew potions—that the only reason she had ever come close was because Gordy was Projecting his ability through her—she is crushed. Against her better judgment, she uses an invisibility potion given to her by her new friend, Cadence, to spy on Gordy.

As Gordy's potion-making talents increase, so does the frequency of his blackouts, which raises a troubling question: What if Mezzarix attacks during one of Gordy's blackouts?

Both B.R.E.W and the Vessel are in danger, and with the potion world in chaos, it's up to Gordy, Max, and Adeline to rally the remaining Potion Masters before it’s too late.

MY REVIEW / THOUGHTS:
I am was so excited to be able to review this book.  The first book was soooo good, and I knew it would only get better from there.

Once upon a time there was a boy named Gordy who was an amazing potion maker.  His mother saw something in him that both excited her and terrified her.  She knew that her boy was special, and that might get him in trouble some day.  He has already had to face trials, but this new adventure brings even more.

Mezzarix, is Gordy's grandfather, and he is a master at potion making.  He was so good, and so evil he was banished to Greenland for the safety of everyone.  Gordy has only met him a few times, and has learned how dangerous he can be.  Regardless, Gordy loves him.

During this adventure we get to see a more advanced Gordy start doing things with potions his mother never imagined.  Some good, and some good, but not too sure about.  Gordy is a master at getting in trouble.  Along with his two friends Max and Adilene.  They seem to have an eye for where trouble is.

There are people after Gordy and his family and they seem to be constantly on the look out for dangers.  This story is full of adventure, intrigue, excitement, and friendship.  Who knew family could be so dangerous, and wonderful at the same time.

Follow Gordy and his friends as they face some unsavory people trying to bring him and his family down, along with B.R.E.W.  People want to do away with B.R.E.W. and Gordy and his family are trying to keep that from happening.  I enjoyed this story so much.  I finished the book in a day.  I love the setting, the story, and the world this book brings to me.  I have to say that I felt like I was right along side Gordy during this whole story.  I love it when a book can do this for me.  It is a great book for middle schooler's, because Gordy is the same age.  I know that my son would really enjoy this series, but I also think its great for people like me who love to dive into the middle grade genre once in a while.  They are just so fun.

Cole's writing is amazing, and brings a whole new world to life for you.  I hope you take the opportunity to pick this book up.  You won't regret it.

Frank L. Cole has lived in such exotic places as the Philippines and Kentucky, and currently lives with his wife and three children out west. While he strived for years to earn his publishing credits, Frank considers sharing his message of “Exercising Your Imagination” to over 45,000 kids across the country as his greatest accomplishment. You can learn more about his writing at franklewiscole.blogspot.com.