BLOG TOUR / REVIEW FOR: THE ASSASSINATION OF JOSEPH SMITH BY RYAN C. JENKINS 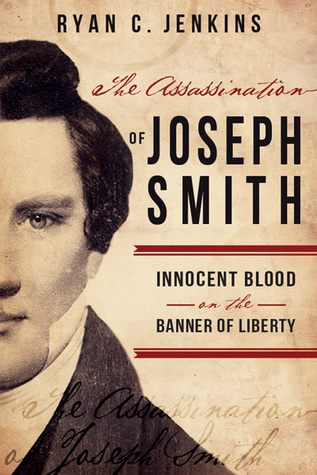 About the book:
The Assassination of Joseph Smith is the story of the first president-prophet of The Church of Jesus Christ of Latter-day Saints. This story begins with Joseph Smith on the plains of northern Missouri in late October 1838. He is thirty-two-years-old and has less than six years to live. This story is written in present-tense form to help the reader feel more engaged with the events and the people who surrounded this distinctive Nineteenth Century figure. There are no fictional characters placed into the story.
The man you will read about in this book is heralded as a prophet by some and held in contempt by others. His name is had for both good and evil. Loyal members of The Church of Jesus Christ of Latter-day Saints, varied historians, and his most vehement critics, then and now, can at least agree on one thing: Joseph Smith was murdered in cold blood.

MY REVIEW / THOUGHTS:
First off, for those who get offended or religious views you should probably stop reading right now.  I loved this book.  I believe I love all books about Joseph Smith.  He is such a great man, and suffered through so many hardships during his life just to bring the gospel to the earth today.
I loved this fact filled tail of the last six years of Joseph Smith's life.  I have read so many things on him, but every time I learn something new.  This book was so heart wrenching at times.  The facts about what was happening at this time in history are horrifying.  I will never understand prejudice.  Why can't people feel free to do the desires of their heart without being persecuted.  It's just so sad.
I love how strong Joseph Smith's faith is during his whole life.  He is such an inspiration to me.  I can only hope that I have the faith that Joseph Smith has.  I don't know if I would have been able to stand strong through all his brutal persecutions.  Not only did he stay strong but he gained more strength and faith from them.
I love how the author has pictures of some of the people he talks about in the book.  It makes it so real to me.  I love how he wrote this fact filled book and made it so interesting.
If you like books on Joseph Smith, then this is a great book to pick up.  His life, and teachings are so precious to me.  I wish he did not have to suffer as he did, but am so thankful he did, so that I could have the gospel in my life today.
Source:  I received this book from the author in return for an honest review.  I was not compensated in any way for this review.  These are my own PERSONAL thoughts on the book.
Thanks to:  Ryan C. Jenkins, and Cedar Fort Publishing for the opportunity to read this great book.
MY RATING:

About the author:
Ryan C. Jenkins has been a student of the life and teachings of Joseph Smith for nearly 25 years. After obtaining his Master of Education from Weber State University in 2004, Ryan began writing opinion pieces for Northern Utah newspapers on family, freedom, politics, and religion. He was a blogger on the subject of faith for two years; many of his posts were featured on realclearreligion.org. He was also an associate editor for Great American Documents for Latter-Day Saint Families (2012). Professionally, he has experience in business, public relations, and religious education. He has been teaching and writing for 18 years. Ryan and his wife Melissa have six children. They reside in Columbia, Missouri.